The Hamster Boy prattles on about his hobbies.

Habits are important in my hobby. Remembering to bring all of the tools and paints that I might need, or the bitz from the Orc box, etc.. Right now, the most important is to keep pressing on on the assembly and painting on my various armies. YES, I want to play, but I finally want to have a fully painted Orc Fantasy army, 2250 pts. YES, it will continue to grow from there, but after 10 years it is time to knuckle down and finish the job.

The last touches were added to the spear/shield unit AND 2 characters (BSB and one of da Bosses), just need to dust, sealcoat, and then add static grass and they are done. When I find some money I will go get the 1/4 round plastic sticks I need to build a good movement base for them. Ugg, I probably already have it, it's just buried in my storage unit...

The Black Orcs are a different issue. I hate how they rank, and that is dissuading me from finishing the paint job. Again, knuckle down...

Remember, every Tuesday at 2d10 games...
Posted by Hamsterboy2k at 5:10 PM No comments:

...where I apologise for not posting. YES, people get distracted, dead, etc... but I wanted to use this as an exersize in writing discipline, and clearly I have failed.
Posted by Hamsterboy2k at 7:00 AM 1 comment:

Following one of the billion terrain and figure links I seem to collect daily, I stumbled onto Amera Plastic Mouldings, a British company that seems to specialize in anything they can vacuuform.

They appeared to have a nice variety of reasonably priced, multi-part terrain pieces, and I couldn't resist ordering a few samples to see how they stood up to my scratch-built stuff. 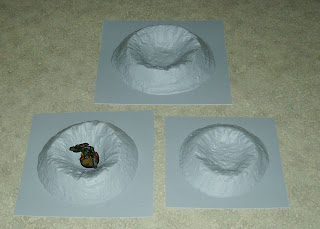 The winner out of the box (so far) has been the Crater Set (£3.25). These look pretty good with little prep needed to deploy them on the battlefield. I am still going to tinker with them (i like the solid feel of a hardboard base) but they are already well worth the cost. 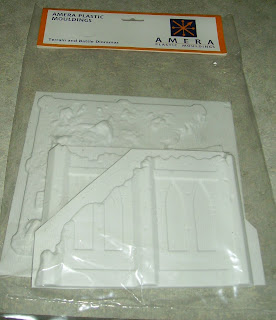 The structures that caught my eye were the Ruined Chapel (£4.95) and the City Block Ruins (£7.95), both of which I have made in the past from foamcore, pink insulation foam, etc.. with good, but labor-intensive results. As you can see, they are going to require much more prep work than the craters, but the details I can see through the packaging looks promising. 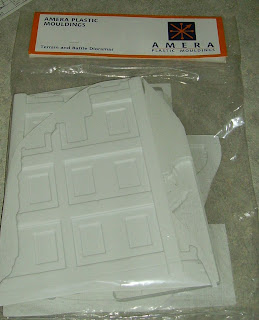 I will take pictures of all the components as I break them out and down so you can see how I assemble and paint everything.

I wanted to mention how cooperative and responsive the people manning their website are; they obviously check in on the weekends, and had a shipping quote and approximate currency exchange to me within 24 hours. I paid for them on 07MAR10, and they arrived today, 20MAR10, not bad for a trip across the ocean. The box was packed well, and everything arrived in good condition. The craters did not have "shelf ready" packaging like the other 2 pieces, but for my purposes, that's fine.
Posted by Hamsterboy2k at 2:22 PM No comments:

I have a friend with a laser cutter, and I have piqued his interest by suggesting there is profit to be made on these shoes. We are still in the very early stages of negotiation and pre-production, but if the materials and labor are reasonable I will be looking for a way to buy thin cardboard boxes, and then attempting to sell these bad boys. Honestly, I am excited. I don't expect them to make me rich, but it would be nice to make a little scratch from a hobby item.
Posted by Hamsterboy2k at 4:01 PM No comments:

I finally put figs-to-table and did an 1850 pt Warhammer 40K game on Tuesday night. Waaagh! Rockeeta (Orks) vs a Dark Angel Deathwing army. Scenario: Annihilation. I tend to field large, troop-heavy forces, and this was no exception. With what I had painted and assembled, combined with what I could proxy from my various parts bins, I was able to put about 145 Orks on the table - not too shabby. The Deathwing army, all Terminator Marines with one Land Raider, was maybe 30? models - very small, but relatively powerful. The smaller, elite army has the advantage in this scenario, though, as they have fewer units to destroy, and will never run off the table. I (of course) had lots of larger, flimsier units that could be torn apart like wet tissue paper and tend to get skittish as they shrink.

I haven't played much, and was using an untested list, so a loss was pretty much expected. I am much more focused on creating a balanced tournament list, and understanding how the various parts of my army work right now rather than racking up victories. Having a rudimentary knowledge of the 5th ed. rules, here is a short list of what I learned:

1) Large Ork units are totally worth it. The basic Ork is skilled in melee combat, and is resistant to damage due to its high toughness, but that doesn't begin to tell the story. 30 Orks, even with poor ballistic skill, will hit something. When they shoot, it is just a torrent of lead flying though the air. I assumed they not only wouldn't hit the Terminators (needing a 5 or better to hit), but if they did wouldn't be able to hurt them. Wrong. The Deathwing player still has to make armor rolls every time you wound him, and eventually he will roll a one. Terminators have one wound, just like everyone else, so I was surprised how quickly they fell. Melee was even better, as Furious Charge gave my Orks a better Initiative and Strength, so most Orks were getting 4 attacks at WS4 at ST4 in the first round of combat. if 20 Orks make it to your position you are looking at up to 80 attacks!

2) Mob Rule!'s hidden fee. While keeping da ladz from scooting off the battlefield, Mob Rule! has one little problem: extra casualties. Mob Rule! makes any boyz unit Fearless as long as it has 11 or more models. What I didn't know about fearless is the No Retreat rule: any time a unit will NOT flee due to morale modifiers (fearless, etc.) and LOSES combat, it gains as many wounds as they lose the combat by. These can be saved with additional armor rolls, but most of my Orks don't even wear much armor. Ultimately, this rule could DOUBLE my casualties if I am doing particularly bad in combat. Against normal infantry, or even regular Marines, it wouldn't have been so bad, but against terminators it was like watching waves crashing on the shore. I kill one guy, he kills 5, and then 4 more guys just up and get hurt. Stupid Orks... :)

3) The Deff Rolla is totally worth it. Starp it onto the front of a Battlewagon and get D6 St10 attacks on a unit, and now (thanks to the FAQ team) on an enemy vehicle. All for 20 points! This really goes to emphasize how important it is to specialize how you equip your vehicles. I made 2 Battlewagons, one for close combat (Deffrolla, 4 big shootas and an 18-man Gretchin unit inside) and one for ranged combat (killkannon, kannon, 4 big shootas) I had a looted vehicle out there, too, but only to soak up points. Don't Press Dat! was funny, but put the vehicle in a place i didn't want it to be.

4) Lootas are totally worth it. Great unit. Not skilled, but potentially firing a devastating hail of fire (D3 St7 shots for each model) completely across the table (48") Throw a Mek in there and you can deal with most light armor, too.

5) I need to be able to deal with armored units better. I am leery of the Tank Hunters. They just look... too random for me. We'll see how I feel after a few more games. Power Claw for every Nob would be a good alternative start. Yes, it strikes last, but unless your unit gets wiped it WILL strike, as the Boyz soak up the damage.

Generally, I am happy with my performance. I had some lucky breaks (one teleporting DW unit was lost to the warp, 3 Termies died from an exploding Battlewagon) and rolled pretty well. Ultimately I lost, but only by one "kill point" which is pretty close to a draw. I only left him with 2 termies and the Land Raider (unscathed, I might add,) but he killed/chased off more units than I did. It was a fun game, and I am excited to get to play again.
Posted by Hamsterboy2k at 5:01 PM No comments:

I love Munchkin, and wanted to protect my new set with plastic card sleeves. Between this, and any future expansions I will add, it makes the cards hard to stack. Solution: I built my own card shoe. 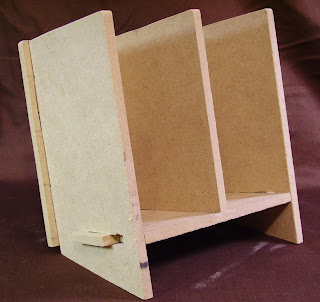 It's just over 6 inches tall, and leans back at a 10 degree angle to keep the cards in the shoe. For those of you not familiar with the game, it has 2 decks of cards, the "Door" deck and the "Treasure" deck, which have to be kept separate. 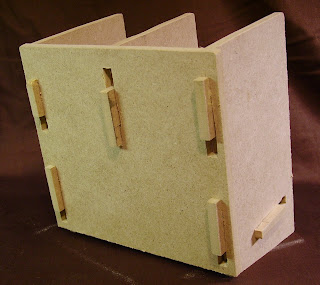 I made it from 1/4" MDF hardboard, a cheap wood normally used in my terrain construction, and some cabinetry, I guess. It's pretty weak material, you wouldn't want to make anything nice out of it, but it is great for hobby stuff. Another thing I wanted to do was build it with no nails or glue, like many of the dice towers and wood terrain I am seeing pop up across our hobby. 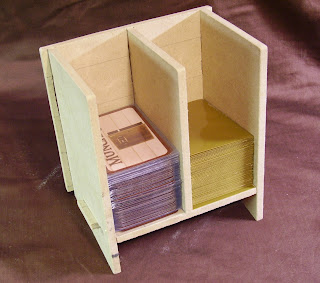 The whole project took a couple hours (mostly drafting out what I was going to do) but the material cost were negligible and I am very happy with the structural stability. Now I need to find someone with a laser cutter who will make and sell these for a profit. All I want is a credit, and uh... some free terrain?
Posted by Hamsterboy2k at 6:04 PM 1 comment:

After accumulating quite a pile of random 40K Ork stuff over the years, I decided to take the plunge in 2008 and actually start building an Ork army.

Anyway, sometime after my birthday, where my girly bought me a HUGE pile of new Ork stuff, I knuckled down and started putting Exacto to plastic sprue. Now, only 9 months later, the first mob is done.

The bulk of these particular boyz are from the Assault on Black Reach box. They are nice sculpts, easy to clean/build/etc. and I was able to trade for MANY of them. Most new 40K players are Space Marine fans, and I only had to twist a few arms to get enough boys to finish this mob.

The eagle-eyed among you will notice I have them on movement trays in the first picture. These are Lord of the Rings trays from GW, and are nice and reasonably priced. The more savvy 40K players out there are saying, "Aha! where's my pie-plate template??" and, yeah, they are pretty vulnerable to artillery fire. I, however, am here to play Warhammer, not spend all afternoon moving 100+ individual Orks around the battlefield. Template weapons be damned.

I am still calibrating my camera, but I have a few (blurry) close-ups. 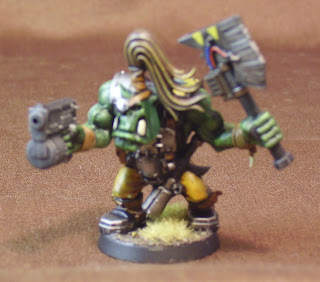 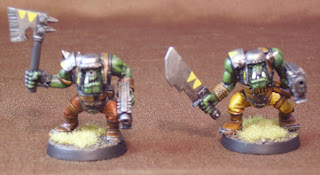 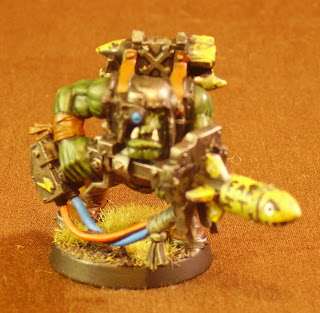 I haven't done this in a while, so I need to figure out my camera problems. The lighting is tricky, but I'm working on it.
Posted by Hamsterboy2k at 6:39 AM No comments: